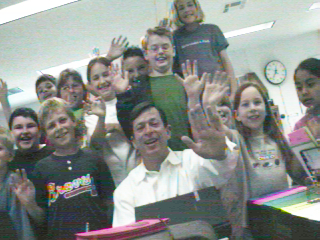 Music Notes, Inc. was founded by Jess Buice (Bice), an elementary music specialist with twenty-three years experience in elementary music and choral conducting. Knowing the benefits of daily music reading to his own educational success, Mr. Buice began developing sight-singing materials for primary and elementary music during his first year of teaching. Twelve years later, tested in rural, suburban and inner city public schools, these materials are now known as Music You Can Read ®, the first internet based elementary music curriculum.

Awarded a full music scholarship, Mr. Buice holds a Bachelor of Music in Vocal Music Education from Sul Ross State University, Alpine, Texas. He was active in student government as a representative and author of the Student Government Election Code, elected President of the Music Club, selected as a member in the Texas Chi Chapter of Alpha Chi Honor Society, and served for two years as a member of the Program Council. Mr. Buice performed leading roles for the Theater of the Big Bend as well as operatic roles for the Sul Ross Music Department. In 1979 and 1980 Mr. Buice was twice elected to Who’s Who Among Students in American Universities and Colleges.

In 1995 Mr. Buice served as Director of the Fulton County Children’s Honor Chorus and as a member of the Spivey Hall Education Committee, on the campus of Clayton State College and University, Morrow, Georgia. Invited by the National Boards for Professional Teaching Standards to join the National Assessment Development Team for national certification in music education; a sixteen member team comprised of professors of music and music specialist from across the country, Mr. Buice joined the team in June 2000. Upon completion of their work, he served as a trainer and facilitator of assessments for the National Boards for Professional Teaching Standards in the field of Elementary Music Certification.